On being a baby queer-feminist with Virginia 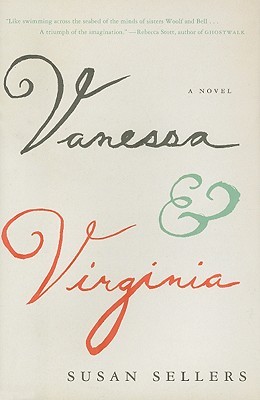 Recently, in one of those rather random moments at a bookstore, I picked up the short novel Vanessa and Virginia by Susan Sellers. Written in 2009, the novel is a fictionalized, yet by all accounts very faithful, account of the relationship between Vanessa Bell and her sister Virginia Woolf told from Vanessa’s point of view. I love family drama, so I probably would enjoy it regardless. But it also touched a chord because of the role Virginia Woolf’s novels played for me as a teenager and young woman. Reading her prose allowed me to feel things I wasn’t, and opened a journey of queer-feminism at a time when I found little else to guide me. I’ve since grown and reflected on Woolf’s work in a more critical way, but there was a time in my life that I held her books close and thought of her as my favourite author.

I read most of Virginia Woolf when I was in high school, struggling to figure out who I was and living with the effects of an emotional and relational closure that I had been cultivating to protect myself. To the Lighthouse was always my favourite of Woolf’s books, with Orlando and The Waves coming in close seconds. I read Mrs. Dalloway first and, while I liked it, it never meant as much to me as the struggles and beauty of the prose in those others. I don’t know how I would feel about these books now, but I know how much they meant to me at the time. I related a great deal to the kinds of sadness and unknowability captured in her work, and found comfort that I was not alone in being tormented and paralysed by what appeared such little things. Woolf’s ability to cut deeply into the most inner heart of her characters through the most superficial of surfaces and encounters was mesmerizing.

I was always captured by her exploration of a personal life through the mundane in To the Lighthouse and the portraits of human feelings expressed and unexpressed. Later, I became aware of the ways Woolf was challenging the monotony of patriarchal and bourgeois norms by writing women outside of their male gaze, and in ways that searched for liberty and the freedom to be and, most importantly, to think. Orlando is one of the sharpest pictures of this, but all her novels do it in a way. Woolf was also deeply engaged in character, and in the ultimate unknowability of others. Exploring the female mind, as Woolf might say, was a critical task for undoing the male gaze of literature.

Reading Vanessa and Virginia elaborates on these forms of freedom, explored through their lives and modes in which they chose to live. The kind of relational and sexual liberation they tried to achieve through their circles and celebration of creativity as acts that upended social norms are important to understanding the kinds of characters that Woolf wrote. Despite sometimes being the most ordinary of people, they have extraordinary inner worlds, even when those inner worlds lead to dark places as most of her characters do.

As I engaged with her during my young adult years, I was surprised and later pleased to learn more about Woolf’s sexuality. Woolf was beloved by my mother, a dedicated English major with very conventional and moralistic ideas about gender and sex. What she described as the ‘rumours’ of Woolf’s same-sex relationship, I embraced for a truth about her bisexual identity and a clear facet through which to read her writing. I rejected the stilted and British view that the homoeroticism of authors like Woolf was only about reflections on deep friendship or about some artistic temperament. I also came to understand how a plethora of emotional and intellectual intimacies were part of queering the conventional bindings of relationships. It was only later that I also came to understand the kinds of polyamory that were practiced within the Bloomsbury group as a way to challenge conventions of the time and began thinking back to how the novels I read were shaped by these more open views of both relationships and love.

Later, during my graduate studies, I watched the film Orlando and reconnected with the bizarre, gender bending, character study that had encouraged me early on in my own engagement with my gender and sexual identity. I also remember watching The Hours when it was first released in 2002 (and I later read the book). Unlike The Hours, Vanessa and Virginia is more open about Virginia’s sexuality and Vanessa’s struggles to be sexually autonomous within the patriarchal terms of male-female relationships. The Hours, as a movie, relies more on the subtext and assumed knowledge (though the book is thankfully more explicit). Woolf was, therefore, important to me, too, as a budding queer.

There are things about Vanessa and Virginia that make me uncomfortable as well. The portrayal of Vanessa’s domestic life is a sharp and sad reminder of the deep roots of patriarchy even in so-called liberated spaces. The gendered care work that occurs, in both the mundane tasks of managing a household and in the larger labours of keeping other people in your thoughts is present in both the stuffy patriarchy of their childhood and in the nebulous patriarchy of the creative world they inhabit.

I am also reminded reading the fictionalized accounts of their London life that Virginia’s feminism was not a global or an intersectional one. She certainly understood the role that economic independence played in political independence and, again, in the independence to think, but her class concerns largely ended there. The Bloomsbury Group, which she was instrumental in forming, was anti-imperialist and, more importantly, anti-war but that did not necessarily translate into breaking down the bounds of liberal whiteness. Their anti-imperialism has been connected more to their rejection of the social structures and hierarchies they were raised in than to interest in liberation of oppressed people. For Woolf, we can see that her racial concerns were certainly aligned with the white feminism of the middle classes. Small details of their lives, including accounts in the book of Vanessa and Virginia dressing up as ‘island girls’ to attend a party – liberated by only covering their breasts with flowers in pre-war London – is all it takes to be pulled back into the full reality of the world these women were writing and portraying.

Vanessa’s work, while prolific, has not had the cultural power that Virginia’s did. But she is the narrator and subject of this book, even if she shares the subjective space with Virginia. Vanessa is the one who cared for Virginia, and for so many others in her life, and still tried to find time to express herself creatively. In some ways, I think this makes her a more interesting person to explore at this moment in my life.

There’s lots to challenge about Virginia Woolf, about the Bloomsbury group, about the class and racial implications of the kinds of freedom and queerness they practiced and proposed. Her writing is also not for everyone; it can seem very solipsistic at times. In Vanessa and Virginia, Vanessa insists that she wants to live in a world untouched by politics, an escape from the relationship between her art and the structures around her. While understandable for a woman in pre-war England, it is also not a view of artistry that necessarily builds more space for others to be liberated, and it speaks to a certain kind of woman in a certain kind of place and time. That’s the issue with all figures like Virginia – they are not voices of a single feminism, they are women in places and times working towards opening spaces for themselves and maybe for others like them.  Virginia Woolf is not an unproblematic fave, but she did open my mind and, more importantly, my feelings at a time when they could have remained very closed, so for that she remains important.